The possibility of serious illness is the greatest consequence of water contaminated by microorganisms, since some of these organisms cause disease. In the United States, particularly in public water supplies, the threat of disease is minimal because water is purified. However, diseases caused by polluted water are of concern in third world countries and can be a threat in private well water that has become contaminated. Illnesses caused by bacterial contamination are usually intestinal disorders with symptoms including diarrhea, nausea and dehydration. Some diseases which may be transmitted by water are: gastroenteritis, dysentery, hepatitis A, cholera and typhoid fever. The following two organisms are ones that have been responsible recently for outbreaks of illness in the United States.

You may have heard of the cryptosporidium outbreak which occurred in Wisconsin in 1993. This organism is a parasite which was found in a public water supply that met all state and federal drinking water standards. Approximately 400,000 people became ill. This parasite can live in the intestinal tract of animals and humans, and is excreted in feces. Runoff of animal wastes after heavy rains or failure of sewage treatment plants can cause it to enter surface waters. Although our water treatment plants purify water fairly well, one form of cryptosporidum is not killed by chlorine which is the typical disinfectant used in treatment plants and swimming pools. The only reliable way to remove this parasite is by extra micro-filtration methods that are not always used in treatment plants. Boiling water can kill cryptosporidium in home water supplies. Normally healthy people usually recover from an infection with cryptosporidium, however, people with weak immune systems, such as those suffering from AIDS or undergoing chemotherapy for cancer, are more at risk for severe complications. 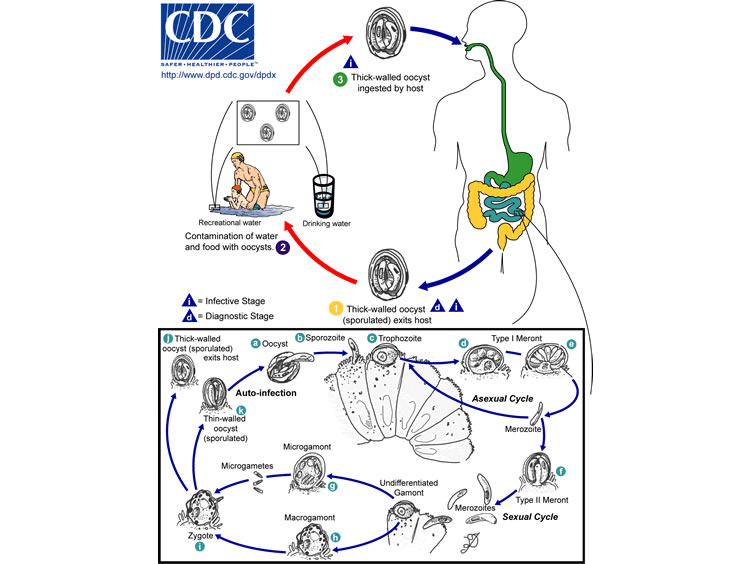 Image courtesy of the CDC

This organism is also a parasite which can live in the gut of warm-blooded animals, birds and frogs. It is shed in the feces of these animals and can potentially contaminate water supplies. It also causes intestinal ailments and is difficult to remove by chlorine alone. It is difficult and expensive to test water for cryptosporidium and giardia. Although some problem organisms such as these do sometimes show up in public water supplies, water treatment plants in the United States generally do an excellent job of delivering good quality water.