There’s a lot that goes into the making of an egg! To understand exactly how an egg is made, we first need to know what its parts are.

Parts of an Egg

Yolk. This is the most obvious part of the egg contents—the yellow part near the center.

Albumen. This is the clear part we call the egg white. It’s called this because it turns white when cooked. There are two layers of albumen: thick (near the yolk) and thin.

Chalaza. Located in the thick albumen, chalaza is simply albumen that is twisted tightly. It keeps the yolk in the middle of the egg and prevents it from sticking to the inside of the shell.

Shell. This is the outer covering of the egg holding everything together.

How a Hen Makes an Egg 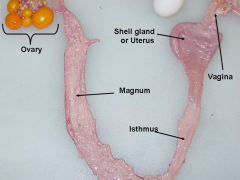 The egg is formed in the reproductive tract of a female chicken, called a hen. The reproductive tract is divided into two major parts: the ovary and the oviduct. The ovary is where the yolk is added. When the yolk reaches the right size, it is released from the ovary by a process called ovulation. The released yolk is then picked up by the infundibulum. It is here that fertilization must take place.The yolk then passes to the magnum, where the albumen is added. It then goes on to the isthmus for the addition of the shell membranes. The developing egg spends most of its time in the shell gland, where the shell and any shell pigments are added. As the egg is being assembled it travels down the oviduct small end first. In the vagina it is pushed out the large end first. This prevents the egg from being contaminated by fecal material when it is laid.

How are eggs produced in the United States?

How many eggs can a hen lay in one day?