You may wish to begin by viewing an interactive learning lesson here Earth’s Atmosphere. Or, you may continue with the information below and come back to the lesson later.

Life as we know it would not exist without our atmosphere. It protects us from most harmful radiation, slows down and burns up small meteorites, and moderates temperature within a manageable range. It also contains a mixture of gases to support human, animal, plant, and aquatic life.

There are several different layers that make up the atmosphere. Each layer is unique and has different temperatures, pressures, and amounts of gases. 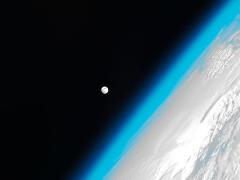 The stratosphere is directly above the troposphere, extending 16 to 50 kilometers (10 to 30 miles) above earth. Temperature here is well below freezing. This layer contains ozone (O3) which absorbs most of the harmful ultraviolet radiation from the sun which causes skin cancer. Unlike the troposphere, temperature actually increases with altitude. Because the atmosphere is less turbulent, commercial passenger jets prefer to fly in the lower part of the stratosphere making for a smoother flight and better fuel economy.

The thermosphere is the layer of very rare air above the mesosphere. Changes in the energy coming from the Sun influence the height of the thermosphere which can range from 500 to 1,000 kilometers (311 to 621 miles) above earth. Temperature in this layer is very hot – ranging from 500°C to 2,000°C (932°C to 3,632°F) or higher. However, because the air is so thin, it would feel freezing cold to us.

Some scientists consider the thermosphere to be the uppermost layer of the atmosphere. However other experts consider the exosphere to be the final frontier before space. Air here is extremely thin as it ‘leaks’ into outer space. The boundary is not very clear but experts estimate the exosphere between 100,000 kilometers (62,000 miles) and 190,000 kilometers (120,000 miles) above earth’s surface. This is nearly half-way to the moon.

The ionosphere is a series of regions within the mesosphere and thermosphere where high-energy radiation from the Sun has collides and separated electrons from their atoms and molecules – resulting in electrically-charged ‘ions’.

Image: By Mysid – Vectorized version of w:Image:Atmosphere gas proportions.gif (originally by Brockert). I SVG’d it a) to make it more international (chemical symbols) b) to make it (hopefully) clearer when rendered as a thumbnail and c) to make it easier to modify., Public Domain, https://commons.wikimedia.org/w/index.php?curid=823817